Disaster in the Arctic: The Final Voyage of the Karluk.

In June of 1913 the 129 foot former Aleutian whaling ship Karluk steamed north from British Columbia, part of an ambitious Canadian expedition to survey Canada’s northern coast. The Karluk planned to sail across the top of Alaska before rendezvousing with another ship, the Alaska, at Herschel Island, just west of the Alaska-Canada border. The Karluk was then to survey the Beaufort Sea as far east as the ice would permit while the Alaska documented the flora and fauna on the Arctic coast. 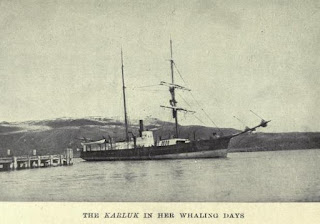 The expedition was led by Vilhjalmur Stefansson, a 33 year Canadian born anthropologist who had made a name for himself by living with and documenting the culture and lives of the Inuit, a legendary but still mysterious people in the early 20th century.
The Karluk stopped in Nome to pick up dogs, and at Point Hope, to hire two Inupiaq hunters. At the Cape Smythe whaling station near Barrow, two more Alaska Native  hunters, Kataktovik and Keraluk, came aboard, along with Keraluk’s wife Keruk and their two young daughters, Helen and Mugpi.
The ship wiggled eastward through increasing ice but became permanently trapped on August 13, 235 miles east of Barrow and the same distance west of Herschel Island. Over the next few weeks the ocean currents pushed the ice and the ship west, back along the Alaskan coast. On September 19, considering the prospect of a long meatless winter stranded in the ice, Stefansson decided to walk to the Colville River to hunt for caribou. He was accompanied by the two Point Hope hunters and several men from the expedition. 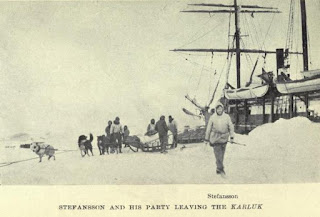 Stefansson planned to be gone about 10 days, and instructed the ship’s captain, Robert Bartlett, to place a beacon on the ice with instructions on the direction the ship was headed, in case the ice-bound ship begin drifting faster than usual. On September 23 the speed of the drift increased dramatically and soon the ship was drifting west at 30 to 60 miles a day. Stefansson was unable to find the Karluk when he returned, and spent the next year exploring the Arctic with his Native companions.
Meanwhile, as winter set in and the ship drifted steadily west, Captain Bartlett ordered supplies unloaded and a camp to be made alongside the Karluk, in case the ice threatened the ship.
By early 1914 the ship was 50 miles north of Wrangel Island off the Siberian coast. On January 10 the ice began crushing the hull and the next afternoon Bartlett played Chopin’s Funeral March on a Victrola record player, stepping off the sinking ship moments before it disappeared below the ice. Twenty two men, one woman, two children, 16 dogs and the ship’s cat were now stranded in the Arctic darkness, 50 miles from land.
With sufficient food and shelter the group was in no immediate danger, but ultimately, survival meant getting to Wrangel Island. Pressure ridges twenty to a hundred feet high blocked the way, so on January 21, a four man party left to scout a way through. Ten years later another expedition found their bones on Herald Island, a few miles from Wrangel Island. What killed them was never determined, though carbon monoxide poisoning has been suggested, since intact cases of food and seemed to rule out starvation.
On February 4 another four man party set out, but also disappeared. The party persevered however, and after much tribulation hacking their way over and through the pressure ridges, the remaining 17 people arrived at Wrangel Island on March 12.
With several injured men and food now running low, Bartlett decided to go for help by dogsled, accompanied by Kataktovik, one of the hunters who had joined the expedition at Cape Smythe. The pair left on March 18, traveled over the ice to mainland Siberia and overland to the Bering Sea Coast, where they caught a whaling ship to St. Michael, near Nome, arriving on May 24. From there Bartlett radioed news of the disaster to the Canadian government.
On Wrangel Island the survivors were hungry and riven by dissension over lack of food. In May two men died of a strange malady later diagnosed as nephritis brought on by poorly prepared dried meat. On June 25 another man was found in his tent, dead of a gunshot wound. Whether the shooting was suicide, accident, or murder was never determined. The survivors continued to argue over their meager rations of birds and bird eggs, their only food.
In June the American revenue cutter Bear arrived in Nome and Bartlett persuaded the captain to head for Wrangell Island to perform a rescue. On August 25 however, after numerous stops along the Alaskan coast, the ship ran into impassable ice twenty miles from Wrangel Island and then had to return to Nome for more coal.
In the meantime, Stefansson’s secretary Burt McConnell, who had accompanied Stefansson on their caribou hunting trip the previous September, encountered the 97 foot King and Winge in Barrow. The ship, recently constructed in Seattle to fish halibut, had been chartered for the summer to hunt walruses and trade for ivory in the Alaskan Arctic, but the ship’s master agreed to steam for Wrangel Island. On September 7, 1914 the ship picked up the fourteen survivors and after transferring to the Bear a day or two later, they arrived in Nome on September 13, 1914, to general happiness.
Of interest to Kodiak readers is the rescue vessel King and Winge, which fished halibut in the Bering Sea for decades and was well known in Kodiak as a crab fishing boat from the 1970s until she sank in the Bering Sea in 1994.
The Inuit family, Kuraluk, Kuruk and their daughters, Helen and Mugpi, took up their previous lives in Barrow. Surviving members of the expedition later credited the girls as "important sources of cheer at the darkest moments.” Mugpi, or Ruth Makpii Ipalook as she was later known, lived to age 97 and died in 2008. She was the last survivor of the Karluk expedition.

The ships cat, Nigeraurak, ("Little Black One"), who had joined the ships company at the beginning of the voyage at Esquimault BC, survived the sinking of the Karluk, the journey across the ice and the deprivations on Wrangell Island, and was rescued in September 1914. According to Jennifer Niven in “Ice Master: The Doomed 1913 Voyage of the Karluk,” she lived long and had many kittens.

For more information on the Karluk disaster, see The Ice Master: The Doomed Voyage of the Karluk (2001) by Jennifer Niven.
Posted by KMM at 1:23 PM 1 comment: