The Barbarossa and Its High Seas Desperado 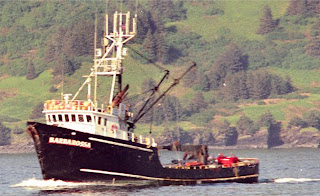 In the early morning hours of February 10, 1991, the 98 foot crabber Barbarossa disappeared near the Pribilof Islands in the Bering Sea, most likely after rolling over with a load of 80 crab pots on deck.  Six men died- skipper George Brandenburg, Dennis Olberding, Tim Schmitt, Darryl Gross, Brian McPherson, and Don Bright. Brandenburg, Olberding, and Schmitt were long time Kodiak fishermen and their loss still cuts deep in this community whose fortune is bound so tightly to the sea, and for which it has paid so dearly with the lives of its fishermen. They were good men who died young, undeserving of their fate.

But there is more to the story of the Barbarossa than its instability or the loss of six men, as tragic as those deaths were. In a strange and circumstantial reminder that nothing is certain at sea, and that fate is an invisible hunter, two crewmen got off the boat only hours before she sank, and were replaced by two unluckier men. The boat’s engineer, Dave Mathison, broke his wrist shortly before the last trip, and the cook, Rodney Horning, was put ashore on St. Paul Island after an argument with the skipper. Even more bizarrely, Rodney Horning was actually Danny Ray Horning, previously convicted of molesting his daughter and fleeing from a California murder charge to the wilds of the Bering Sea.

The story of how Horning came to be on the Barbarossa began the previous September, when an angler fishing in a river near Stockton, California hooked a trash bag containing the dismembered leg of a local catfish farmer and sometime marijuana dealer named Sammy McCullough. Police later found Mr. McCullough’s torso, severed head and arms, and the steak knife he was cut up with in the same river. He had been shot in the head with a .22 caliber rifle.

McCullough had previously been robbed of a large sum of money, presumably related to his marijuana business, and had testified against Danny Ray Horning’s brother Steven, who did time in prison for the crime. Police matched the slug found in McCullough’s forehead with a .22 caliber rifle belonging to Danny Ray, but by then he’d had skipped to parts unknown.

Five months later, a few days after the Barbarossa went down, Danny Ray Horning, still calling himself Rodney Horning, told an Anchorage reporter about his near miss on the Barbarossa. He claimed the boat was unsafe and that he’d quit after quarreling with skipper Brandenburg over a bowl of mushroom soup. Mathison the engineer would later maintain that Horning had been fired for being incompetent and lazy, and that he’d threatened to kill Brandenburg.

On March 22, 1991, six weeks after the Barbarossa rolled over, Horning was arrested in Winslow, Arizona, coming out of a bank with $25,000 of other people’s money, a hostage bank manager, and a 9mm pistol registered to the previously murdered Sammy McCullough. At trial, Horning bragged that no prison could hold him and taunted the judge to give him the maximum sentence. The judge obliged with four consecutive life sentences for robbery, kidnapping, and assault. With Horning apparently on ice for the rest of his life, California authorities declined to extradite him for the McCullough murder, a decision they would long regret.

In May 1992, Horning escaped from the Arizona state prison in Florence, and led lawmen on a 54 day chase across Arizona and New Mexico. Along the way, he burglarized houses for food, guns, and money, robbed another bank, hid out in the Grand Canyon, and carjacked a number of people, including two female British grad students in a rental car. He let them all go unharmed after cheerfully regaling them with tales of his exploits, minus the parts about child molestation and dismembered bodies.


When police finally caught him asleep under a porch with a 44 magnum revolver in his hands, he told his captors that “It was really a fun chase. I wish I could do this every week.”

Horning was eventually extradited to California and sentenced to death for the murder of Sammy McCullough. He has been on San Quentin’s Death Row since 1995.