For fisherman and sailors, the ability to tie a few useful knots is essential and among the first things a greenhorn learns. Knots can be learned from books and even YouTube videos, but most novices depend on their more experienced fellow deckhands for hands-on lessons, until their “fingers can see,” the knots and they can be tied without thinking.

In Kodiak, the basic knot kit includes a bowline, clove hitch, square knot, sheet bend, and a belaying knot to secure a boat to a dock. Crab fishermen also use the Carrick bend to tie buoy lines to their pots, and local longliners often use a Japanese longline knot to tie their skates together.

It is worth mentioning here that while many non-mariners and green deckhands use the words “rope,” and “line,” interchangeably, these are two different things. Rope is unutilized cordage, as for example the spooled coils of rope for sale at marine supply stores. Line is rope which has been put to a specific task, such as a mooring line.

Aside from decorative knots, of which there are many, utility knots - whether used at sea or in other endeavors – are of three varieties. A “hitch,” fastens a line to an object, a “bend,” attaches two pieces of line to each other, and a “knot,” stands alone in a piece of line. Humans have been using these to master their environment for a very long time.

The oldest evidence of knots as a technology are grooves carved around the base of stone spear points indicating that knotted plant fiber or animal sinew, long since rotted away, was used to tie the points to wood or bone weapon shafts. The oldest of such points have been found in South Africa and date to 500,000 years before the present, a place and time indicating the knots were tied by a hominid species called Homo heidelbergensis, an ancestor of ours who lived several hundred thousand years before modern Homo sapiens evolved into the world.

The first physical evidence of braided line is a wisp of three-ply cord found in a rock shelter in France, woven from the inner bark of an evergreen tree. Three strands, each twisted separately clockwise and then twisted counter-clockwise together, form the finished braid, exactly as rope is made today, though machines do this now instead of hands. Entwined around a flint blade, the assemblage is believed to have been made by Neanderthals 40,000 to 50,000 years ago.

Moving up the evolutionary tree of knot technology, a piece of mammoth ivory found in a cave in Germany in 2015 is believed to have been used by anatomically modern humans to make braided rope 40,000 years ago. Fiber strands would have been pulled through four holes drilled in the tool, and then twisted into a single plaited rope.

The oldest physical scraps of tied knots date back only about 15,000 years however, and the first recognizably modern knot, an early version of a bowline, was found on a 2,500-year-old Egyptian Pharaoh’s boat unearthed in 1954.

Knots enter the written record when John Smith, paramour of Pocahantas and a founder of Jamestown, mentions the bowline in “A Seaman’s Grammar,” in 1627: "The Boling knot is also so firmly made and fastened by the bridles into the cringles of the sails, they will break, or the sail split before it will slip."

By the middle of the 19th century, as the Age of Sail reached its zenith and thousands of inexperienced young men were going to sea, numerous volumes described knots which had previously been taught only by direct demonstration, from hunter to hunter and sailor to sailor, since the dawn of history.

Ashley’s Book of Knots, first published in 1944, is now considered the gold standard of knot tying books. Clifford Ashley, trained as an artist, became passionate about knots after drawings sailors at work on a New England whaling voyage. With economical and elegant prose and easily understood diagrams, his book describes about 3,900 knots, from the ubiquitous bowline to arcane specialty knots, decorative plaits, and even “trick knots,” useful mainly for making sport of the gullible.

Of the previously mentioned Carrick bend, Mr. Ashley says it “is perhaps the nearest thing we have in a perfect bend. It is symmetrical, it is easy to tie, it does not slip easily in wet material, it is among the strongest of knots, it cannot jam and is easily untied.” 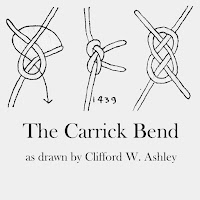 Mr. Ashley does not exaggerate. Easy to learn and fast to tie, the Carrick bend allows crab fishermen to swiftly add or subtract pre-measured 25 fathom “shots” of line to or from the line connecting a pot to its buoy, to make the overall length appropriate to the depth into which the pot is dropped.

If made correctly the Carrick bend knot will hold so long as the line remains sound, yet can still be untied by hand, even after the knot has carried a loaded 1,000-pound crab pot to the surface a hundred times.

Interestingly, Alaskan crab fishermen have found a way to tie the Carrick bend faster and easier than shown by Mr. Ashley. A comparison between the method described in the book (see the drawing) and a demonstration by an experienced crab fisherman will prove this point.

I close with one last interesting knot, which Mr. Ashley somehow missed. Despite an otherwise encyclopedic effort he fails to mention a knot familiar to generations of seamen, perhaps even Pharaoh’s sailors, and demonstrated still for the benefit of greenhorns and children. I direct the curious to Google search for the “dragon bowline.