The Romance of the Sea Wears Thin- The St. Patrick Disaster, December 1981

Just after midnight on Saturday, October 4, 1980, a fire broke out in the engine room of the 427 foot Prinsendam, a Holland America cruise ship with 320 mostly elderly passengers, and 200 Indonesian crewmen and Dutch officers on board. The ship was  in the middle of the Gulf of Alaska, 150 miles south of Yakutat, on a cruise from Vancouver to Singapore.

The fire went quickly out of control. The crew sealed the engine room and flooded it with CO2, but the fire kept burning.

A few minutes before 1 a.m., Captain Cornelius Wabeke, a 52 year old mariner with 30 years’ experience, ordered his radio officer, Jack Van der Zee, to send out an URGENT Morse Code radio message. On hearing it, Coast Guard Communications Station Kodiak requested that the Prinsendam send a full SOS message, preceded by an international auto alarm, which would ring an alarm bell in the Radio Officer’s and Captains’ staterooms of any nearby ships, even if they were not on the bridge to hear an URGENT message at that late hour. The Captain however, concerned that an SOS would give legal permission for other ships to salvage the Prinsendam, directed his radio officer to hold off on the alert. Van der Zee made the SOS broadcast anyway, saying later that “If I lose my license, get fined, and go to jail, at least I will be alive and so will the passengers and crew, God willing."

At 1 a.m. Wabeke informed the passengers of a “small fire in the engine room,” and ordered them to the promenade deck. They arrived dressed in everything from tuxedos to night dresses. Some were barefoot.

The Coast Guard meanwhile began coordinating a rescue with H3 helicopters and C-130s from Sitka, Kodiak, and Anchorage, and the cutters Boutwell in Juneau and Woodrush in Sitka, and the Mellon, near Vancouver. The Exxon tanker Williamsburg, 90 miles south of the Prinsendam, hearing the SOS, turned around and headed for the burning ship.

By 2:00 a.m. the smoke in the promenade lounge had forced the passengers outside. Unable to return to their staterooms because of the fire, underdressed people wrapped themselves in draperies torn from the windows. By 3:30 the fire had burned through the wiring to the ship’s firefighting pumps and the ship had developed a starboard list as water entered the hull through portholes blown out by the fire. Sometime between 5 a.m. and 6:30 a.m. Wabeke gave the order to abandon ship.

Six lifeboats, four inflatable life rafts and a ship’s tender were lowered. While the officers tried to maintain order, many of the crewmen climbed over the passengers in a panic to get aboard the boats. When they pulled away, several, designed for 60 passengers, had 90 people aboard. Captain Wabeke and a firefighting crew stayed behind, along with several Coast Guardsmen who had helicoptered in, and some of the ship’s entertainers who had not found room in the boats.

The Williamsburg arrived around 8 a.m. and the helicopters began ferrying people from the lifeboats to a helipad on the tanker. A Coast Guard doctor triaged the passengers as they landed and put those in poor shape onto helicopters headed for Yakutat to refuel. He would later say that he’d seen a woman with a brain tumor, a man with a malaria attack, and others with epileptic seizures and terminal cancer. All of them were cold, wet, and hungry. Winds at dawn were 10 knots and seas were less than 5 feet, but by 5 p.m., the wind had increased to 50 knots and the helicopters could no longer manage the lifts. The cutter Boutwell lowered a small launch, but many of the Prinsendam’s crew trampled the passengers again climbing from the lifeboats to the launch, so the effort was abandoned. The cutter then lowered a 40 foot Jacob’s ladder, but this was more than many of the passengers could manage. Eventually, and they were winched onto the Boutwell’s deck with a sling.

Captain Wabeke, the last man on the Prinsendam, was lifted off the deck around 6 p.m. The Williamsburg headed for Valdez with 450 passengers. The Boutwell went to Sitka with the rest. On October 11, a week after the fire began, the ship rolled on its side and sank in 8,000 feet of water.

Holland America told shopkeepers in Sitka and Valdez to run a tab and give the survivors anything they needed. They bought a lot of clothes. The national media descended on Southeast Alaska, and learned the hard way that a rental car cannot be driven from Juneau to Sitka. The passengers wrote letters of gratitude to the Coast Guard for saving their lives.

A Dutch Court of Inquiry reprimanded Captain Wabeke and some of his officers for mishandling the emergency, effectively ending their careers. Radio Officer Van der Zee was awarded the Order of the Netherlands by Queen Beatrix for doing the right thing.

As in most disasters there were moments of greatness and of ignominy, but in the end, remarkably, 520 people were rescued from a burning ship 150 miles from land, in October, in Alaska, without loss of life. In number of lives saved at sea, it is the U.S. Coast Guard’s finest rescue effort.

On February 20, Coast Guard Appreciation Day, we should remember too that some of the Coast Guardsmen who helped save people on the Prinsendam still live in Kodiak.

Note- The exact count of passengers and crew varies depending on which source is used. The numbers cited here are from an August 4, 2007, Coast Guard Report, “Top Ten Coast Guard Rescues.”
Sources for this blog post:
https://cgaviationhistory.org/wp-content/uploads/SAR/1980_PrinsendamCB.pdf
https://www.kcaw.org/2015/10/21/35th-anniversary-of-the-prinsendam-part-1-the-rescue/
A Morning To Remember The Prinsendam fire kindles concern about safety at sea.
Time Magazine, 10/20/1980
Coast Guard Announces 1,109,310 Lives Saved Since 1790. USCG Press Release 8/4/2007
Posted by KMM at 1:47 PM 9 comments: 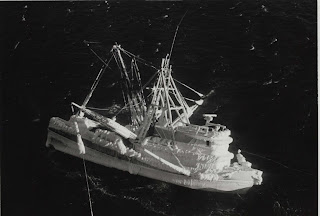