The Once and Mighty Kodiak Shrimp Fishery 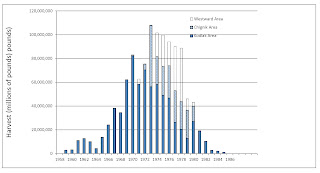 Almost forgotten now, thirty four years after it ended, a mighty shrimp fishery once thrived around Kodiak and down the Alaska Peninsula. From a modest harvest of 31,000 pounds in 1958, to a peak of 122 million pounds in 1973, to the last deliveries in 1986, the fishery followed the classic bell curve of a boom and bust resource. But unlike some other once healthy fisheries, most observers believe the shrimp fishery died, not from overfishing, but from a natural cycle of warmer water and increasing numbers of cod and other shrimp loving fish.
Though dock prices were never spectacular- $.04 per pound in 1958 to $.35 per pound in 1986- the fishery was worth $11.5 million at its peak in 1979. About fifty boats fished shrimp that year for an average of $230,000 per boat, and crew shares between $18,000 and $25,000, before expenses. But of course, as in every fishery, the wealth was distributed unevenly, so some boats did spectacularly better than that, and their crews were the envy of the waterfront.
The fishery came to be after a NOAA research vessel, the John N. Cobb, did some test trawling in the Gulf of Alaska, beginning in 1950. The boat found large concentrations of northern pink shrimp, Pandalus borealis, around Kodiak Island and the Shumagin Islands. The findings got the attention of both fishermen and processors.
But while there were plenty of shrimp to be caught, the processing end of things was more problematic. Northern pink shrimp are small- 50 to 100 per pound- and getting the shells off the cooked shrimp by hand was slow and labor intensive. In 1958 however, a Kodiak processor brought in three peeling machines from the Gulf of Mexico shrimp fishery. With some tinkering they worked, and other processors rapidly set up their own peelers in Kodiak, Seward and Seldovia. By the late 1950s, the fishery was on.
Shrimp congregate on muddy bottom in depths of around 50 fathoms, or 300 feet. To catch them, fishermen tow or “drag,” a large, open mouthed, trawl net across the bottom. Once the net is hauled back the shrimp are washed with hoses to remove mud and small fish, and then carefully layered with ice in the hold. A well iced load can be safely held for three or four days, but a poorly iced load produces methane gas as the shrimp decompose, which has killed a few unlucky fishermen over the years.
In the late 1970s it was not uncommon for a boat to haul in 20,000 lbs. in a single hour-long tow, and to leave the dock in Kodiak and be back with a 200,000 lb. load in 24 hours. At first the fishery was unregulated, but by the early 70s there were quotas and four seasons a year, which spread the effort and made processing and marketing the shrimp easier.
One of the first boats to go after Alaskan shrimp was the Mylark, which skipper Chet Peterson brought up from Westport, Washington. He was followed by many others, including the Burch brothers, Al and Oral, who went shrimping in 1959 with the Marigold. They delivered shrimp caught on the east side of Kodiak to the Halibut Producers Coop plant in Seward.
The Burch brothers fished the Marigold for a few years and then bought the Celtic, which ended up a mile inland in Seward after the 1964 tsunami. The brothers then bought the Endeavor, and because the Seward processing plant had been destroyed by the tsunami, found a market at Ocean Beauty in Kodiak, and relocated there in 1964. They went on to own and operate the draggers Dawn and Dusk until the mid-2000s.
While these facts of the Kodiak shrimp fishery are fascinating, other shrimping stories have their own historical charm.
In the late 1960s Frank and Eben Parker arrived in Kodiak to go shrimping after making a name for themselves whaling off the Oregon coast in 1961. (See “Whaling on the Tom and Al,” https://kodiakmaritimemuseum.blogspot.com/2015/09/). Following a successful shrimp trip in the early 70s, the men headed to an uptown Kodiak establishment for some relaxation.  They found however, that neither had enough money to pay the barman, so one of them went back to the harbor to retrieve his wallet. Exactly which brother went is now lost to history.
Arriving on the boat, either Eben or Frank found a miscreant aboard, stealing the crew’s personal belongings. The fisherman overpowered the robber, tied him by the ankles, hoisted him up with the single hook, and then lowered him overboard, upside down, so the man’s head was an inch above the water. He told the thief the tide was rising, but he’d be back as soon as he could with a policeman.
The thief, misunderstanding the nature of floating boats on rising tides, hollered and swore and begged a gathering crowd to be rescued from certain drowning, until lawmen and both Parker brothers arrived and brought him back aboard, with nothing wet but his hair.

Sources: ADF&G biologist Dave Jackson; “Back to the Sea, The Autobiography of a Marine Biologist,” 2008, by Dayton Alverson; and recollections of fisherman Al Burch.